Today is the day! Tonight is the Miss New York pageant! Almost 30 girls have been rehearsing for hours, competing in preliminaries, and dying with anticipation for the past few days, but finally the big day has come, where one of those girls will walk away with a crown and a year as Miss New York!

Living as a good pageant girl should, I started my day with a big summer salad. I filled a huge bowl with artisan lettuce, sliced baby cucumbers, chopped strawberries, and some blueberries. Tossed that in some herb vinaigrette and I was set! 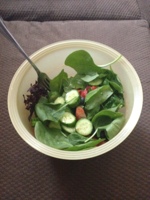 I was going to wear a dress I had purchased from Gap last year, but when I got to my parents’ house I couldn’t resist a peak at the dress rack. I found a purple dress that had originally been Lauren’s interview dress, but was deemed as too shiny. However, it is not to shiny for tonight! I tried it on and it fits, and still matches the gladiator heels I bought myself for my birthday and planned on wearing.

I got to Crossgates, the pickup for the carpool, with time to kill. I parked near the cinema so hopefully I don’t get a ticket tonight. Five minutes in, I passed this super modern Asian drink shop that I had to check out. It was ADORABLE! 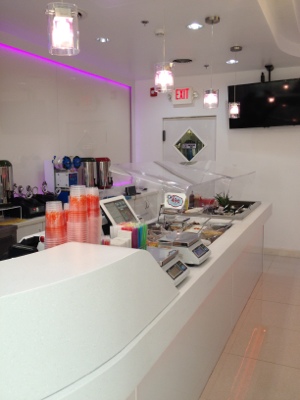 There was self serve frozen yogurt with toppings, then it is weighed and you pay .49 cents per island. Then there is fruit tea and milk tea and bubbles. I got a peach bubble tea and it was delicious. 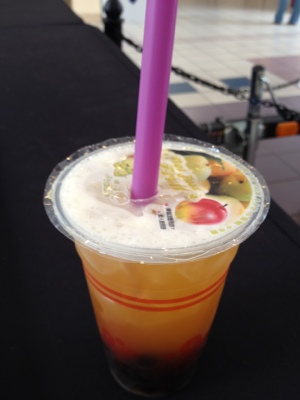 With 20 minutes left to waste, I walk by a nerdy kid with a clip board who asks me if I want to take a 15 minute survey. I agree before he tells me I’ll get paid. Then I am sure I will do it. I go in a little room and eat some chips, answer questions on the computer, and then walked away with $4 in my purse. Win!

The drive down was fine. Crazy drivers are to be expected. Hobos with a sign that says “Need money for kung foo lessons” are no so expected. But we made it there in one piece.

St. George Theater
Tickets were $27 which is better than I had thought. College ID got half off of 55. I thought 55 WAS the half off, so I splurged and bought a Georgie drink (coconut rum and pineapple) and a MNY tee.

Opening Number was very forward and fun. The ladies wore white pants and blazers with silver tanks and heels. Kaitlin wore shorts! I thought it was strange at first but now I like it. There were 3 ladies from FMCC, which was a neat representation. When they left the stage, Claire Buffie, Miss New York 2010 came out in black shorts and a black blazer, looking beautiful as ever.

Then we were asked What does it mean to be a New Yorker? They played a video where all the ladies answered it. I loved how Colleen, Miss Fulton County, mentioned Saranac Lake, but I was kinda offended when Nina, Miss Greater Rochester, pronounced Albany as “ahl-bany”.

Top Eleven
There should be a Top Ten, but we could vote for People’s Choice the past few weeks which secured an extra girl a spot. The winner of People’s Choice was Southern NY. Then they went on to announce the Top Ten: Gotham City, Western, Staten Island, Brooklyn, Niagara, NYC, Manhattan, Verrazano, Metropolitan, and Greater Rochester! Thats 3 upstate girls. I really thought Katelynn Smith, Empire Rose was going to make it.

Then the Star Princesses came out and Kaitlin had a little conversation with them. They were teeny, but so adorable!

Next came swim suit, or Lifestyle & Fitness. The ladies all wore red suits, and the non finalists came out for the dance as well. I was impressed by Caitlin, Fingerlakes, and Courtney, Mohawk Valley. It was obvious some of the girls were sucking in, which is unfortunate. And one girl was wearing a boring, plain pony tail. Not fabulous. When the finalists came out, Nina was fabulous.

This year the Outstanding Teen Competition was right with the Miss competition, so they all came out. I learned that they have an academic achievement category, which the Miss pageant should have! I was totally loving OT2011’s dress. I wish I could have taken pictures.

Talent
I want to know how someone goes to a pageant and says “I want to twirl from chiffon hanging from the ceiling, hook me up, bro.” and the pageant people make it happen. But they did. The first talent was from the circus. She was crazy. The rest were boring ballet “self choreographed” dancers, and 2 opera singers. The one tapper was disappointing because I was up in the balcony and couldn’t hear her taps. I noticed that the girls with powerful music seemed to look more powerful and confident with their dancing. Nina was fabulous with her Bollywood dance. The rest, you must have to be a dancer to have enjoyed.

Evening Gown
All the ladies returned for evening gown, and I was impressed. There was an overload of sparkle coning from the stage. Many of the dresses were 100% sequin! Some were 75%, but a majority of them were glitterfested. Katelynn, Empire Rose, really stood out. It was an elegant black with silver sparkle top and one long sleeve. A few of the others were beyond gorgeous as well.

Then there was an intermission.

Top Five and Onstage Question
When we came back it was time for Outstanding Teen’s Top Five. They were Long Island, Queens, Empire Rose, Albany, and Fulton County. I was so excited. There was a chance that at least OT would be represented by an Upstate girl. And I knew two of them. Their onstage questions were to explain the “one little thing” they could do to improve a certain aspect of life. They drew the aspect from the fishbowl. There was like health and time management and money. Fulton County rocked hers.

The Miss girls came out and they announced their Top Five: Manhattan, NYC, Niagara, Greater Rochester, and Brooklyn. I was so glad that we (upstate girls) still had Desiree and Nina to represent. Desiree won two prelims, and Nina is just amazing. Their onstage question was similar to the OT girls, @as they all chose a topic and had to explain why it was important for Miss New York. The topics were, respectively: marketing and public relations, intelligence, beauty, sponsorship, scholarship. Desiree stumbled on her words a bit, which was discouraging. But Nina gave the best answer.

Crowning
The Outstanding Teen girls came back first. I was super excited because Upstate girls had a 3/5 shot of representing NY at Miss America Outstanding Teen. They announced 4th runner up Long Island, and the girls next to me were bummed because they were her friends. 3rd runner up was Fulton County. Then they said 2 runner up was Empire Star, but she was actually albany, which made things weird. 1st runner up was Queens, which meant Miss New York’s Outstanding Teen is EMPIRE ROSE! Totally excited for that. Hello, Upstate! Its still weird that they messed up Empire Star OT and Albany OT… Who was supposed to place? Who gets that scholarship?

But at last! Miss New York crowning moment. 4th runner up, devastation, was Niagara. I have no idea how that happened. I was thinking at least 1st runner. Third was Brooklyn, and second was my girl Greater Rochester. Manhattan won 1st runner up, and our new MISS NEW YORK 2012 is Miss NYC, Mallory Hagan!