The first thing on our itinerary was to attend the Miss America Pageant Vendor Show and Expo. There would be famous designers and shops there selling their products. The show had been going on all week, and of course the day we would attend it was set to close early. We hurried there as soon as we hit Atlantic City.

I was starstruck from the moment I walked in the expo. We only had an hour to look around, and I wasn’t expecting to buy anything anyway. Before I arrived Adrienne had shot me a text that read, I just tried on a dress that costs more than my car.  I can’t afford a new car, but if I could I wouldn’t spend that money on anything but a car. 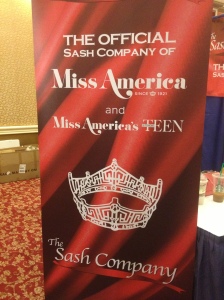 My first stop was the Miss America’s Princess Sashes. Kristy had given me $30 to pick some up for the Salt City Royalty and Miss Salt City programs to use as prizes for fundraisers. Before I could ask which colors she wanted, a woman bought the last 4 pink sashes. The clerk said they had a different pink that had sold out too. But I think black is classier.

Shelby, the co-executive director for Miss Thousand Islands was actually at this table! I was so neat to run into someone right off the bat from our little Miss America Upstate Local family. It wasn’t hard to spot them though, as she and her 2 counterparts were all wearing the Orange Sigma 7 shirts sold by Miss New York in support of Nina before the pageant. I was super bummed I didn’t buy one, but we had not planned to go down until last minute.

These sashes are going to mean so much to the girls. The 2014 gives a greater value now that Nina won. She is from a small suburb outside of Syracuse. Her win truly shows that one of these girls who competes in Salt City Royalty and eventually Miss Salt City could go on to become Miss America. Nina helps Miss America embrace the “girl next door” ideology, and put a “real”  and “genuine” feel to Miss America. 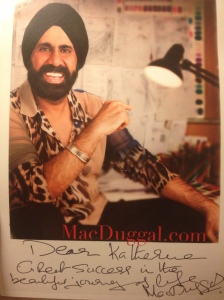 Not moments later, literally at the next table, was Mac Duggal. The Mac Duggal. The dress designer. We all got autographs, and Adrienne tried on some more dresses. He told Carrie he loved her skin, and called Adrienne beautiful. We later ran into Sherri Hill. It was incredible to see the actual designers for these dresses that are the name and face of pageantry.

It was while standing here that I spotted a flash of red hair and heard a southern drawl, and turned to see Anna Laura Bryan, Miss Alabama 2012. During the 2013 Miss America pageant I was her biggest fan. She has a slight resemblance to my sister, and I actually made a pic stitch of them and tweeted it to her. She replied, and we had a fairly long tweetversation about being a redhead in the pageant world, and other things. I didn’t want to be a creeper, so I didn’t chase her. I just fangirled inside. 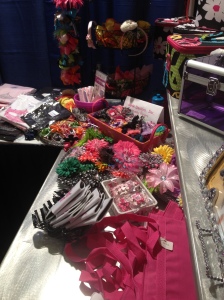 One of the vendors were selling hair flowers and headbands and whatnot. Linda, Kristy Lee’s mom, makes and sells similar products known as Kaylee’s Krowns. Most of the people who buy them are dancers or the girls in SCR pageants, but clearly there is a demand in higher level pageants too!

Later, while making the rounds, I came across a dress that was cheaper than a car. In fact, it was cheaper than any dress I had eer bought. But it was pink princess and not my style. But it was only $50 and I almost bought it just because it was so cheap. I instantly started peaking through that rack, and found other dresses for incredibly cheap prices as well. Then I found the dress of my dreams. A full sequined, purple, size 4 dress for only $75. But the expo was closing in 15 minutes and I wasn’t sure if I wanted to buy it on such a whim. I had put some money aside to attend the pageant, but was not planning on buying a gown, even at such a reduced rate.

Carrie told me to try it on. So I did and it fit so well! I was too lazy to take my bra off, so it looks terrible silly. Don’t mind the changing girl in the background. Hopefully she doesn’t read this and get upset. I shouldn’t have been taking photos in the changing room anyway. But I don’t think she’s showing that much. As a pageant girl, she shows more in the Lifestyle and Fitness Section.

But, another star struck moment, Anna Laura Bryan was in the changing room! She tried on a very cute lime green cocktail that looked amazing. I thought it would be terrible awkward to say hi while we were without clothes, however, so I didn’t.

I bought the dress. I had tries to send a picture to my mom for feedback, but the service was lousy and I couldn’t risk missing a great deal.

But then, Anna Laura came out Carrie pressured me into saying Hi. I’m so glad I did. She didn’t find it creepy at all, and said she remembered our tweetversation last year. She shared pictures of her cat (we both like our cats chunky) and she told us about her new jobs. Then she took a photo with me. 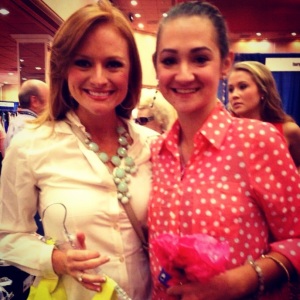 After leaving the expo we walked the Boardwalk a bit. We went to the pop-up Miss America shopand the pier shops. Everywhere we went it seemed like they had caught the Miss America bug. It must have done great revenue boosters for the locals.

Before we knew it, it was time for the Show Us Your Shoes Parade. We settled down in our seats, but not before running into Janet and Kathleen (of the Miss Empire Rose/Empire Star Program), and the entire Miss Massachusetts Board. Carrie even got a Miss Mass teeshirt and pin to wear during the parade. Read more about the parade, here.