The Miss Fulton County is a historic pageant, with a rich history. Their eligibility is limited only to residents of Fulton County, but who better to represent the area than girls who actually live there? I had not asked for the day off from work, so didn’t plan on attending. But at the very last minute I decided to attend the Miss Fulton County 2014 pageant. I left work just after 6pm, jumped on the Thruway and sped to Gloversville High School to see 7 ladies, none of whom have won an official preliminary before, compete for the crown.

I made it to the school just after Lifestyle and Fitness, as they were crowning the new Fulton County’s Outstanding Teen. Thankfully my sister took a photo of the group in their swimsuits so I could get a general idea of the girls’ status. I heard that opening number was very good, as always, as well.

The hosts were hilarious, as they have been in years past. There were so many social media references written into the script. Instagram. Pinterest. Google. Words with Friends. Facebook. Angry Birds. They were literally reading their scripts from iPads.

1. Devyn tapped to a very strange song called “Speaking in Tongues”. It was vocal only, without music. I suppose it did a good job of accented her taps, since you weren’t caught up in the lyrics or music. But the song had low energy and didn’t appear motivate her energy. I personally was caught up in the strangeness of the song.

2. Lexy sang “Say Something”. It was evident she has a great voice, but the song wasn’t the best choice. I liked how he made it her own personal rendition and dropped the octave. Her facials were very good as well. But she just looked sad. The song didn’t do her any favors.

3. Baylee performed Ballet en point to Esmeralda. It was a great performance. Normally ballet bores me, as the closed minded non-dancer that I am. But she used a tambourine and made it fun to watch. The pink tutu was too simple. I would have liked something flashier, possibly some silver or gold accents,  and preferable red, black or green.

4. Morgan did a dance and gymnastics routine last year but sang this time. I’m glad she did because she has an amazing voice. I was totally in love her dress, but it didn’t match the song; A Moment Like This. She was nervous and rigid body with slight rough patches. Where it was good it was great, but she didn’t end with a bang.

5. Heather is going to win a pageant. She just needs some polishing. She is a very dancer, clogging to the song Work by Britney Spears. She wore a super cute, flashy top and leggings. Her over the too facials get her remembered. Randomly in the middle she threw in some break dancing which didn’t work for me. I loved the worm though.

6. Misty performed a Ribbon Dance to Applause. Her costume was very strange yet adorable, and extremely Gaga-esque. It was a flared black mini-skirt with pink tulle tail feather. The top was a simple black cropped top with a pink tulle E-Collar. Halfway through the song at the climax she changed her ribbons to double pink and black, rather than single pink ribbons. She is adorable and full of energy.

7. Emily performed a self-choreographed ballet en point to Hallelujah. Although, as stated above, I know very little about ballet, I can’t deny that I loved her costume. It was purple, so naturally I’m biased. But also it was cute and fun with sparkle. I thought the tiara and arm bands were strange though, and her white tights clashed with her skin tone. For all I know, that was the look she was going for. I’m pleading ignorance here.

1. Devyn wore a red cross shoulder strap. It was a bright red illusion dress, with a solid cocktail length part and a transparency to the floor. She looked very strong as a person, but I thought she had a weak walk.

2. Lexy was very bouncy when she walked, but I think it was because she was overcompensating for trying to be energetic. She wore a gorgeous white Grecian gown with a gold top. Her poses appeared slightly too stylistic of a typical glitz pageant.

3. Baylee wore a full gold dress with transparent illusion cutouts. Her hips were very swervie, but in a natural sexy way. Her hands were glued to her upper thighs when she walked.

4. Morgan wore a simple white dress with silver bling. She walks smoothly, but very quickly. Her poses are very short. She simply needs to slow down her walk and her time spent at each spot.

5. Heather chose her silver Jovani gown with tulle and lots of rhinestone accents. She has a lot of hip movement when she walked, which may have worked better with a heavily beaded dress. I felt she did something strange with her had on her hip, but I couldn’t put my finger on it.

6. Misty is such a showstopper. I don’t think anyone else would be able to pull of a neon orange single shoulder jersey knit gown, but she did it well. There was a lot of leg movement in posing, which gave her the illusion of added height. She has a great walk, despite being fairly short.

7. Emily has a great walk and a great smile, but she walks like a dancer. It isn’t necessarily a bad thing, because she stands out. She wore her black mermaid. gown with the tulle bottom

Each girl chose a pretty difficult question from a fishbowl, and had a few moments with the microphone to give her opinion. I paraphrased their answers below.
Devyn:
Q: Would you ever demonstrate for women’s rights or civil rights?
A: Definitely for both because women have come so far and we need to keep going. Anything a man can do a woman can do maybe even better
-I loved her answer but she didn’t appear confident in either one.

Baylee:
Q: Do you think that we live in the most dangerous generation ever?
A: No. Government ease drops to prevent terrorism.

Morgan:
Q: Is morality declining in America?
A: I dont think so. Maybe or some. As long as everyone is educated and reminded, it will be ok.

Heather:
Q: With young people having so much access to internet, should rules on plagiarism be changed?
A: No. Teachers are handling it well.
-Her answer’s content was good, but the delivery wasn’t strong. She said “think” a lot.

Misty:
Q: Is aging more difficult for men or women?
A: Definitely for women because of the pressure to be a weight that makes them feel beautiful
-She struggled a lot and stumbled over her words.

Emily:
Q: Should parents read their children’s emails or check their children’s Facebook
profiles?
A: Definitely at a young age to make sure their on the right path. At an older age its good to cut the cord and give freedom. 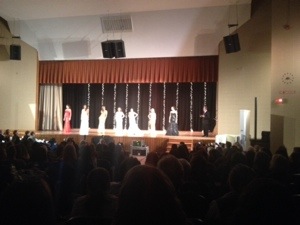