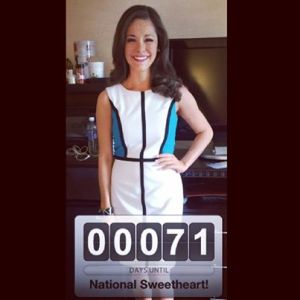 Yesterday, Jamie Lynn Macchia, Miss Staten Island and 2nd Runner Up officially announced that she will be representing New York in the annual America’s Sweetheart pageant. She will be joined by State Finalists from across the country, including Alexandra Curtis; former Miss Upstate NY, current Miss East Greenwich, and 1st Runner Up at Miss Rhode Island.

Sweetheart contestants compete in talent, evening wear, and lifestyle and fitness. The judges are chosen by the same standards as Miss America judges,

For some, competing in the National Sweetheart pageant is an opportunity to gain experience before returning to their home state the following year and trying for the crown again. Many Sweetheart contestants have gone on to win their State title, and nearly a dozen have claimed the Miss America title. For others, this is a last opportunity to compete, as they will be aged out of the system that year. There isn’t a better way to say goodbye.

The pageant will be held in August; we can’t wait to see how Jamie (and Allie) do. Hopefully both come back and take state titles next year. Make New York proud with your empire state of mind.