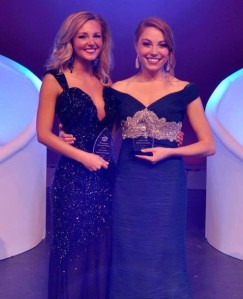 Kathleen Raab, Miss Heart of Indiana, was crowned at the Indiana Sweeps pageant. This competition is open to contestants who have placed at prior pageants throughout the season. She previously competed in Indiana as Miss South Bend 2012. Kathleen currently lives in Brooklyn, NY while she attends school at New York University; Steinhardt School of Culture, Education, and Human Development as she seeks her master’s degree of music, focusing on Vocal performance and musical theater. During her year, she is Fighting for a Cure for cancer, in honor of her late grandmother. She performed O Mio Babbino Caro for her talent, and received the preliminary Talent Award for the first night of competition. During Finals, her preliminary competition scores landed her a spot in the Top Ten lineup.

Rose McClimans competed in the 2014 Miss Finger Lakes pageant, where she took home the 1st Runner Up scholarship. A few weeks later, after returning to Indiana for school, she won the Miss Great Lakes title. She jumped to work to prepare for the state pageant, but actually had her official head shots taken in the canon area at Destiny USA in Syracuse, NY. She grew up and took dance classes in the Syracuse region, but moved to Indiana to attend school at the University of Notre Dame. There, she is pursuing a degree in civic engineering, inspiring her platform Empowering Future GEMS: Girls in Engineering, Math, and Science. During the second night of preliminary competition, Rose took home a talent award for dancing across the stage and into the hearts of the judges. During Finals, Rose made it into the Top Five position, and went home as 4th Runner Up.

Audra Casterline, Miss Hoosier Heartland won the Miss Indiana crown and will be representing the Hoosier heartland at Miss America in September.