Miss America is the largest pageant system with a talent portion. This section is scored 35%, which actually makes it, according to the numbers at least, the most important category of the competition. It’s no wonder that many of our Miss America past winners, as well as countless state and local titleholders, have danced in ballet companies, performed on Broadway, or put out albums. The Miss America system is full of talented ladies.

So what happens when a contestant transfers to MAO from a system without a talent portion. She has the stage presence, poise, and beauty. She’s smart, active in the community, and can depend her viewpoints in her interview. But this future Miss America wanna be has not been singing since before she ould speak or dancing since she learned to walk. Sure, she can do a little of both, but she may not have what it takes to stand out against classically trained girls.

This is similar to the case of Kira Kazantsev, Miss New York 2014. Kira has a beautiful voice. She’s fit and healthy, incredible intelligent, and has a great marketing mind. But the talent section is not what drew her to MAO. 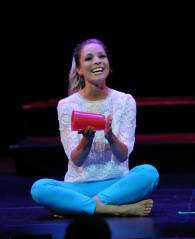 Last year, after the release of the major motion movie Pitch Perfect, Kira performed an a cappella vocal performance to the cup song; originally a camp fire song, and made famous by Luna and the Lamp Shades. The familiarity of the song with the movie, tied with memories of summer camp and the originality of the concept allowed Kira to score high enough both during preliminaries and on Finals night to make it to the Top Ten.

This year, Kira returned to the Miss New York stage with the red plastic cup in hand. She performed an original version of Happy by Pharell Williams, with her own rendition of the cup song’s percussion to compliment the musical backtrack. It was fun, catchy, and technically very good.

The originality caught the judges attention and gave Kira the winning score to go home as Miss New York 2014. Its fun, original, and gets the audience involved.

My thoughts? Find a cup that matches her pants (assuming she carries the outfit through), and add some rhinestones. Choose a song that has clapping or audience participation. And use an assortment of “tapping” techniques, instead of the original beat all the way through. Its entertaining, unique, and fun.

So, when it comes to Miss America, can a cup stand up to the competition? Sound off in the comments below.