Heather Whitestone, Miss America 1994; deaf. Kayla Martell, Miss Delaware 2010; alopecia. Alexis Wineman, Miss Montana 2012; aspergers. Nicole Kelly, Miss Iowa 2013; missing a forearm. None of these beautifully inspiring titleholders let what may appear to be a disability stop them in the pursuit of the Miss America crown. 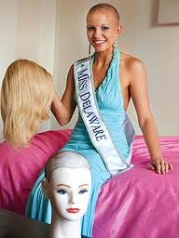 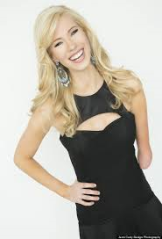 This year, 2014 state titleholders from Kentucky, Idaho and New Jersey have overcame personal disabilities in the pursuit of the Miss America crown. Coincidentally so, 2/3 of these ladies share a name (with different spellings).

Cierra Kaler-Jones, Miss New Jersey 2014, was born with hip dysplasia. This normally means the thighbone does not fit correctly into the socket in her hipbone. It could be caused may many things, and generally does not severely effect the person. However, for Cierra, hip dysplasia had the potential to prevent her from reaching her dreams of being a dancer. In fact, as a result of her hips being unaligned, she is unable to do a split. But this did not standing in the way of her pursuit of the Miss America dream. After winning local titles and competing at Miss New Jersey in the past, this year she took home the Miss New Jersey crown.

Sierra Sandison, Miss Idaho 2014, was not born with type 1 diabetes, but was actually diagnosed when she was 18. Generally speaking, this form of diabetes- am autoimmune disorder, is diagnosed during youth. It is different from type 2 diabetes, which may be caused by diet or weight. Thankfully, Sierra was diagnosed before it became life threatening. After monitoring her insulin levels with shots for a short time, she decided to use an insulin pump. Pumps help to regulate glucose levels quicker than checking blood sugar with a finger stick, and injecting insulin manually. Although she had the option to remove her pump during competition, she was not ashamed of her pump and chose to wear it during the evening. It may have gone unnoticed during most phases of competition, but certainly stood out during the Lifestyle and Fitness competition. Photos with her pump went viral, and encouraged a national campaign #ShowMeYourPump to promote pride for insulin pumps, hearing aids, and the like.

Ramsey Carpenter, Miss Kentucky 2014, faced a harsh reality in 2010 when she was physically unable to play her fiddle at her grandmother’s birthday. The doctors determined she was showing signs of muscular scerosis, an autoimmune disorder where the person’s body literally attacks their mylene sheaf. The sheaf is a protective covering around the nerve, much like the plastic part around a wire. This causes the signal from the brain to get short circuited, and the nerves will break down. Unfortunately, at the current time, muscular sclerosis does not have a cure, and progressively worsens over time and although Ramsey received shots to help aleviate the symptoms. During her year as Miss Kentucky, Ramsey hopes to help increase awarness of this invisible disease and bring it to the forefront of the medical world, with hopes of finding a cure.

Right here in New York, we have beautiful titleholders who have overcome medical obstacles to achieve their dreams. Caitlin Nolan, Miss Erie Canal 2014 wears her insulin pump during each local pageant, and at Miss New York, unashamed of her platform Juvenile Diabetes Support and Awareness. Julia Rae Schlucter, Miss Metropolitan 2014 advocates Singing on the Top of My Lungs to raise awareness for Cycstic Fibrosis, which she was diagnosed with before birth. Lauren Crandall, Miss Mohawk Valley and Nina Zesky, Miss Salt City both suffer from severe eye sight limitation, and without strong prescription glasses are near blind; worse than standard near sightedness.

Although I did not win a title, I competed in Miss New York locals with the disability Charcot-Marie-Tooth; a neuromuscular disease similar to muscular dystrophy. It personally presented itself in my back, shoulders, and hips, and I often looked very awkward as my body slanted on stage. I struggled to maintain proper posture and balance. I tripped over my own feet, and had times when I could not sign my words properly because my fingers were numb. But my optimism was always a strength. It is still a goal today to inspire girls across the country with CMT  to compete in confidence boosting pageants.

Back in 2012, Miss Massachusetts’ Outstanding Teen Amy de Silva represented my home state at Miss America’s Outstanding Teen, while promoting the platform of  CMT: It’s Okay to Be Different. She, too, suffered from yet refused to be defeated by Charcot-Marie-Tooth. For Amy, the disability presented itself in her hands, fingers, and wrists. She struggled to complete simple tasks like tying her shoes. But just like she had the perseverence to compete at Miss Massachusetts’ Outstanding Teen each year from the time she turned 13, to the time she won at 16, she persevered through life’s struggles to overcome the disability and promote it during her reign. While at the Outstanding Teen competition in Jackson, Florida, Amy was a Teen in Training Finalist for her work with this great platform. Hopefully she soon competes at Miss Massachusetts!

There is no reason that a disability should hold you back from your dreams- especially if your dream is to use the Miss America Organization to inspire others and make a difference in the community.