What interested you about ANP, and what finally convinced you to make the switch? I’ve known about this system for a while, it was just starting up a few years ago and finally decided to compete this year. I’m glad I did because it’s a great system to be a titleholder for and the directors are very sweet and caring. There’s no craziness and all the girls form a sisterhood.

What interested you in competing in pageants? I played softball my whole life until college and then finally stopped (although I just started back up again!) I wanted to do something with my time so I looked up pageants online and signed up for the first one I saw, which was NYUSA. I was hooked and have been competing ever since.

What has been your favorite appearance or service event so far this reign? 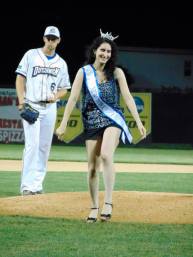 Appearance: Throwing the first pitch for the Albany Dutchmen baseball team on their opening day. It was great meeting the players and I’ve become very close with the organization throughout their season. One of the players even asked me for MY autograph!

Service Event; fashion show for lupus awareness, it was so fun teaming up with other pageant systems to raise awareness for a terrible disease and to see everyone come together.

What appearance or service event would you like to do most before the end of your reign?

Appearance; I would love to throw the first pitch at a subway series game! I grew up a Mets fan but my cousin is a Yankee so I support both teams.

Service Event; I would love to attend the RAINN (Rape, Abuse and Incest National Network) rally in DC in support of my platform.

Which is your favorite phase of competition? This is very hard to choose but it would be a tie. I love swimsuit because it gives me a chance to show off all the hard work and dedication I’ve put into my healthy style. I also love interview because it allows me to 100 percent be myself to the judges If you could add, remove, or change (either approach or scoring) of one phase of competition I think all pageants should have one on one interviews instead of panel. That allows contestants to be more intimate with the judges and it can be more personal. 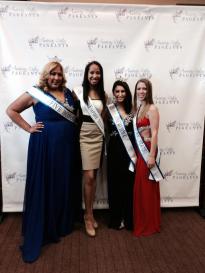 How do you prepare for pageants? I practice walking and posing quite a bit, taking video of myself so I can see what I need to improve on. I change my diet to cleaner eating as the pageant approaches, and workout twice a day. I also keep up to date with current events.

What advice do you have for a girl who thinks she can’t compete in pageants? TRY IT! If you saw me in high school you would never ever think I could compete in pageants. They are the greatest self confidence builder out there. You don’t have to be the skinniest or the prettiest girl out there, you just have to be yourself. It’s not so much about winning so much as the personal win of being the best version of yourself

Why should you be Miss American Nation? I truly care about the organization and what it stands for. Winning the New York title was a great opportunity for me and I’ve tried to represent it well, and I’m ready to take on the responsibility of a national title and continue to build up the ANP system.