It happened. The unspeakable happened. New York is on fire, and nothing can quench this steam.

Kira Kazantsev, Miss City of New York 2014 became Miss New York 2014. She went down to Atlantic City and represented the Empire State well. So well, in fact, that she made Miss America history as the first three-peat Miss America to be crowned. What?!

Once again, we decided to be a Seatfiller and get free access to the show. Five of us took the weekend off to road trip to 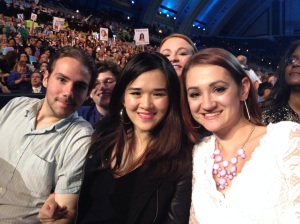 The first announcement was for People’s Choice. Something about Chris Harrison’s wording made us think that the winner had actually scored enough to make it into the Top 15 girls.

Since we were expecting 16 girls, and the auditors were prepared for 16, the judges got to choose another girl based on their preliminary scores.

The Top 12 all returned to the stage in their custom Tony Bowls gowns. Kira’s gown was nearly identical to her gown at Miss New York. Sure it was white, and a jersey knit, but it was stunning none the less.

My predictions based on the 10:

Mississippi, Ohio, Florida, Virginia, Alabama <- Yeah, I had no faith in New York. I thought her gown was fantastic, but I wasn’t impressed with her talent or swim.

This was the most shocking part of the show. Miss Mississippi, in my opinion and the opinion of many people around me, had the best talent. However, we have to remember the scoring! It is not the score of the previous category alone that moves you on to the next category, but the total of the composite from preliminaries, and the categories so far.

Each of the above ladies had to answer a question in 20 seconds. New York and Massachusetts were the best, but Virginia was a very close 3rd. I wasn’t too impressed with Arkansas or Florida. My ranking of OSQ only was NY, Mass, Virginia, Arkansas, Florida.

But the judges had to take these answers, and everything else they saw all week, and rank the winners!
4th Runner Up: Miss Massachusetts, Lauren Kuhn