What do you do when you have competed in pageants for your entire life, literally, and used pageantry as an outlet to promote a platform that means everything to you, but suddenly you are “too old” for one of the most recognizable pageant systems out there? You keep going.

Danielle Trumbull began competing in the Miss Fulton County youth pageants, and at 17 she began competing in Miss New York local preliminaries. She placed at nearly every pageant, where she promoted her personal platform of animal rights, and sang a pop vocal song to impress the audience. In 2012, Danielle was crowned Miss Empire Star and competed in Miss New York, going home with the non-finalist talent award. But in 2013, her final year of eligibility, she did not win a crown. Her years in Miss New York were over.

Except, they weren’t. Danielle’s passion for community service, advocacy, and pageantry was still so strong, there was no stopping it now. The summer after “aging out”, Danielle competed in Miss New York International, and went home with the crown. She now had a state title to further promote animal welfare efforts. She used this as encouragement to start her own pageant: the Little Miss Colonial Pageant. After the first LMCP was a great success, Danielle kept going. She recently competed in Miss New York American Nation Pageants, and to no surprise- she won.

The American Nation Pageants have three phases of competition (for Miss). Following a choreographed opening number routine, Miss contestants compete in the Swimsuit category. Judges base ⅓ of their total score on physical fitness, confidence, poise, and personality.

The next third of their score is based on evening gown. Contestants model a gown of their choice, and are judged on confidence, style, and personality.

Finally, the on stage interview portion! Each contestant is asked a handful of questions from the judges in a media-style interview, allowing the judges to get to know them. The final third of their total score is based on confidence, ability to form an opinion and share a message.

Now, with this new state title, Danielle has continued to be a force like no other. She has been lobbying with legislators to increase the regulations surrounding animal abuse, fundraising for the Regional Animal Shelter and Gloversville Cat Sanctuaries, and put her high heels to the pavement and serve the community.

Keep an eye out for Danielle Trumbull, and her Miss Colonial titleholders, in the community this spring. And be sure to send her your good luck wishes as she competes for the national competition in Virginia Beach this summer! 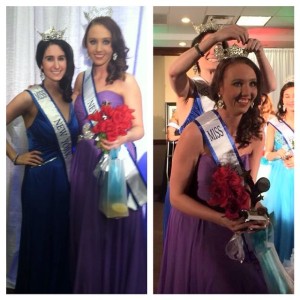