In honor of National Volunteer Week, titleholders across the nation have dedicated today as the inaugural “Miss America Serves Day”. Titleholders on every level come together to volunteer their time in their communities. New York is no exception- and many of the local queens across the state have spent their Saturday serving others.

The titleholders in the Capital Region were joined by Alisa Vasquez, Miss New York’s Outstanding Teen, and made their way to the Albany Ronald McDonald House. There, Lauren Crandall (Miss Upstate New York) and Meghan Cahill (Miss Altamont Fair) helped prepare meals for some of the families who stay there. Later, Baylee Simpson (Miss Fulton County) played with the kids, after helping clean up dinner. 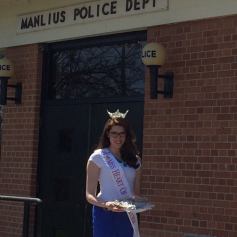 Titleholders in Central New York were busy making a difference across the region. Miss Syracuse, Anneliese Trust, started off her day at Syracuse Meals on Wheels, and then joined Miss Liberty, Meghan Sinisi, at the McHarrie Assisted Living Center hosting a luau party and talent showcase. Meghan had started her day with some of the Princesses at the where they donated items to the Humane CNY. Nina Zesky, Miss Heart of New York, paid a visit to the Town of Manlius Police Department where she spoke at their annual Award’s Banquet.

Volunteering knows no age limits. Some of the Star Princesses in the area promoted National Library week and donated books at Mohawk Valley Community College. They visited the Oneida County 911 Call Center, then brought some donations to the Rome Humane Society.

The titleholders who call New York City home joined Jillian Tapper, Miss New York 2014 at the Silver Lake Care Center. There, they brought fresh baked brownie, hosted a “Day at the Races” series of games, and mingled with the residents.

They spent the evening at DragOn Glamatron, a drag show talent event, where Jillian Tapper served as a “celebrity judge”.

Desiree Wiley, Miss Buffalo,  started her day at the 4-H Public Presentation Awards ceremony. She was then joined with her Princess at Beechwood Nursing Home, where they visited with the residents. Meanwhile, Marivi Howell-Arza attended Joyful Rescues Adoption Clinic at PetSmart.

To view highlights from Miss America Serves in New York, please follow The PageantFile. The full album is available here.