Its no secret that New York is where dreams are made. But for some of the former titleholders or contestants, they chose to pursue their Miss America dreams elsewhere. So far four former Miss New York contestants have competed in other states (Catch up: Rhode Island & Hawaii and Pennsylvania & Illinois), but this week was extra special. Four former Miss New York contestants, and one honorable mention, all competed for three different state crowns. Even cooler, three of this weekend’s Empire State Divas had competed (and either won or placed) in the Miss Finger Lakes local pageant.

(Kristina) Camille Sims held the title of Miss Georgia’s Outstanding Teen in 2010, and competed at Miss America’s Outstanding Teen in Orlando. There, she placed 2nd Runner Up. She attended Cornell University in Ithaca, New York earning her the eligibility to compete. She decided to compete in Miss Finger Lakes 2013, winning the title of Miss Finger Lakes. Fun Fact: The second title awarded at this pageant was Miss Upstate New York, given to Alexandra Curtis, Miss Rhode Island 2015. The two were roommates at Miss New York, and it would be pretty neat if they were roommates again. While at Miss New York, Camille made the Top 10 Finals, and performed a custom rendition of Hound Dog.  This year, she earned the title of Miss Fulton County, which ironically was the local she held when she competed at Miss Georgia’s Outstanding Teen.

Rose McClimans competed in Miss Finger Lakes 2014 while she was home on break from school at Notre Dame University, where she placed 1st Runner Up. The following weekend, after returning to school, Rose won the title of Miss Great Lakes (Indiana). During Miss Indiana Week, Rose won a preliminary talent award for her dance. She made the Top 5, and went home as 4th Runner Up. This year, she competed solely in Indiana, earning the title of Miss Collegiate North.

Back in 2009, Jessica Johnson competed in Wisconsin and earned the local title Miss Beloit. She then took some time off for school, before competing in New York as Miss Liberty City 2012. Two years later, Jessica returned to Wisconsin, and competed for the state title as Miss Wisconsin Central- securing a spot in the Top 11. This potentially sparked a stronger drive, as she is currently Miss Harbor Cities and will compete for Wisconsin once again.

Mary O’Connell competed in Wisconsin in 2011 as Miss Burlington Area Chocolatefest, securing a spot in the Top 11. The winner that year, Laura Kaeppeler, would go on to win Miss America that year. She returned once again, this time as Miss Fox River Valley 2012. In 2013, Mary competed in Miss Finger Lakes with eligibility from Syracuse University. At SU, Mary was a Kappa Kappa Gamma with Alexandra Curtis, and the two had connected. Mary was a runner up, but the competition was tough, since Camille Sims and Alexandra Curtis took the titles that year. Mary decided to try once again in New York, and competed for Miss Empire Rose and Empire Star. Mary won the Miss Empire Star 2013 title and competed at Miss New York. The winner that year, Nina Davuluri, would go on to win Miss America. Meaning Mary has competed on the state level with two Miss America winners.

In 2012, Kathleen Raab competed at Miss Indiana as Miss South Bend. Although she didn’t make it to the finals, she did earn a non-finalist talent award. Two years later she competed again, finally securing the Miss Heart of Indiana title at the sweeps pageant at the end of the season. She won the preliminary talent award, and then made the semifinals. This year she is representing South Bend once again.

The Miss Georgia pageant is unique in its delivery on finals night. Like other state pageants, there were preliminaries leading up to the big night. But during finals, the pageant itself was almost split entirely into two separate pageants. The night began with all Teen and Miss titleholders coming out to the stage, and the Top 10 Finalists in each group being announced. From there, the Teen finalists competed in all phases of the final pageant, leading up to and including crowning and awards. Only then did the Miss Top 10 return and begin to compete in their final pageant.

But anyway… Earlier in the week the Miss Georgia contestants attended an award ceremony lunch, where contestants, volunteers, and others were awarded for various feats. Camille Sims received a Medical Studies Award for her education at Cornell University in Ithaca, New York.

At the start of the Miss Georgia Final, Camille was called during the Top 10. Following the Teen competition and crowning, she returned to the state to compete in all phases of competition. Following evening gown, the Top 10 were called back again for the Top 5 announcement. Camille made Top 5, and prepared for On-Stage Question. Camille was asked about the government tapping phone calls, and gave a solid answer.

Following awards- overall, non-finalist, etc- it was time for crowning. Camille quickly changed her gown backstage to a green walk-on gown, and stood out from the rest of the Top 5 sporting black and white gowns. Betty Cantrell, Miss Warner Robins, won the Miss Georgia title as well as a $15,000 scholarship (plus preliminary and overall award scholarships). Camille Sims was awarded 4th Runner up, earning $2,500. The Top 5 was rounded off with Adeline Kenerly, Miss Capital City (1st runner up, $7,500), Patricia Ford, Miss Cobb County (2nd runner up, $5,000), and Brooke Doss, Miss Troup County ( 3rd runner up, $3,500).

On Wednesday, the first day of preliminary competition, both of the Empire State Divas won preliminary awards. Rose competed in Lifestyle & Fitness and Evening Gown, and won the preliminary swimsuit award. Kathleen competed in talent, and won the preliminary talent award. Embracing the invisible 5th Point of the Miss America Crown, moments before Rose was set to compete in Swimsuit, her bottom snapped beyond easy repair. Kathleen, who was preparing to compete in Talent shortly after, did not hesitate to lend a hand. She had brought a spare suit, and offered it to Rose. Amazingly, it was a perfect fit. Rose went on to win the Lifestyle and Fitness Award and Kathleen won Talent, but even if they hadn’t their friendship is worth so much more.

During finals, both Rose and Kathleen were called for the Top 10 and competed in all phases of competition. To much excitement, both were also called for Top 5, and participated in the On Stage Question. Kathleen was asked if she felt the Bible should be taken literally. She explained that she is a Christian and believes the lessons are important, but that religion should not get involved with the government. Rose was asked about her stance on the The Religious Freedom Restoration Act. Both gave incredibly strong answers.

Following the On-Stage Question, the judges got to work tallying the winners. This time was used to announce awards. Kathleen Raab, a graduation of New York University, received the Okemah Crawford Performing Arts Award.

Morgan Jackson, Miss Harvest Homecoming, won the title of Miss Indiana and will represent the Hoosier State at Miss America in September. Rose McClimans secured the 1st runner up spot, and Kathleen Raab was not far behind with the 2nd runner up position. The Top 5 was rounded off with Lauren Mnayarji (Miss Indiana University) taking 3rd runner-up and Gracie Lyons (Miss Central Indiana) as 4th runner-up. 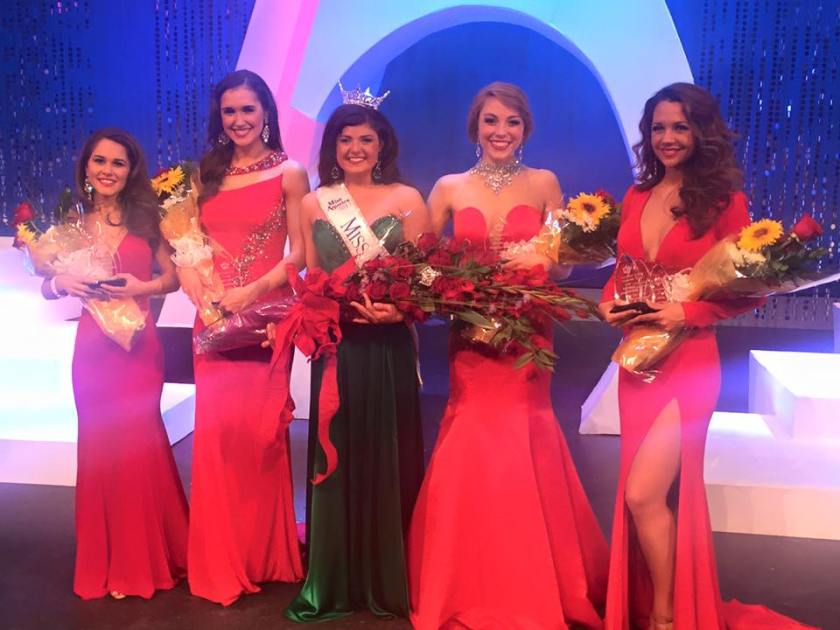 The Miss Wisconsin contestants made their way to Oshkosh for the week long preliminary and rehearsals in preparation for the pageant. Both Mary and Jessica competed during finals, yet neither of them won a preliminary award. During finals, however, both of these fine ladies landed a spot in the Top 10. Following Lifestyle & Fitness, the finalists competed in Talent. Mary sang the classic show tune, My Man from Funny Girl. Later in the evening, Jessica performed the classical piano piece Rondo Alla Turca from Sonata No. 11 in A Major.

When the Top 5 was announced Jessica Johnson advanced, but Mary did not. However, following the Top 5 announcement was many awards. Mary received the Four Points Award and a $400 scholarship based on an essay she wrote addressing how she represents the 4 Points in her life. Jessica was a recipient of a Spirit Award, voted on by the contestants, for representing the ideals of the Miss America program. She also received an award for Academic Excellence, and later announced as the Overall Interview Award recipient. 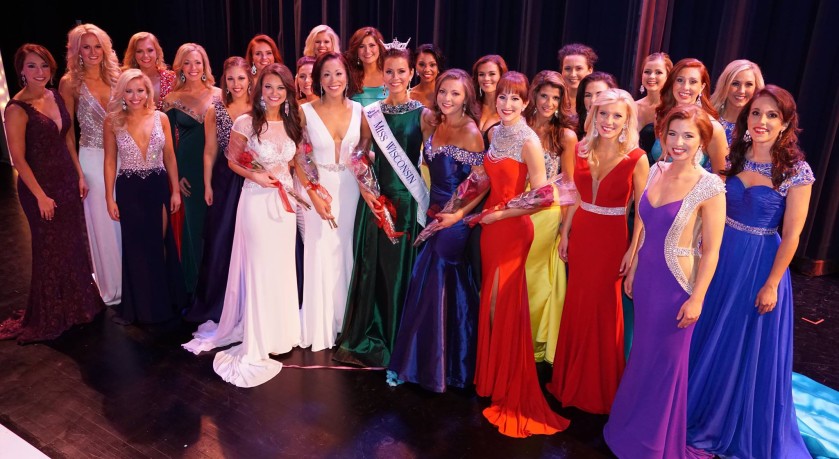