The National Sweetheart pageant, an important part of the Hoopeston Sweetcorn Festival, runs deep with sweet history. Although not affiliated with the Miss America Organization, it runs like an official pageant, and invites a runner up from each state pageant to compete. This year Nina Zesky, Miss Heart of New York, accepted the honor of Miss New York’s Sweetheart. It almost seems like fate that she won that local title. Last year, New York sent Jamie but secretly rooted on Allie Curtis, Rhode Island Sweetheart, as well because of her connection to Miss New York. This year, New York not-so-secretly rooted on three interstate Sweethearts who had previously competed in New York. 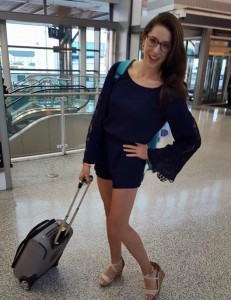 The week began Monday, after packing and repacking a week’s worth of dresses and shoes and other important pageant prep tools. She flew out to Hoopeston, Illinois, and joined 42 other beautiful, poised, charismatic state representatives.

Contestants were housed with pageant volunteers, instead of a hotel. Various local own members hosted 3-4 contestants each, in their home, and accepted them in like family.

The first day of rehearsals was broken up with a shopping trip to Jewel of the Knight, as well as a fun photo booth photo shoot with props and glasses. The ladies were then interviewed for a local radio station. This pageant is a big deal for the local townfolk. The second day included a farm and factory tour in the morning, and an ice cream social that evening! Miss Hoopeston, Aly Nicholls, is the official hostess to the contestants all week, as well as a representative of the town.

Competition stepped up on Thursday, when each girl participated in her private interview with the judges.

After a highly successful live stream experience last year, the pageant was once against streamed, but for a minimal $5 donation. There were glitches, but overall a great opportunity for friends and family to support their state representatives, plus local directors, and other contestants the opportunity to really see what the National Sweetheart pageant is all about.

One of the most exciting parts of the pageant, that takes place off stage, is the parade. The parade highlights the entire festival, but the Sweetheart portion is very similar to the Show Us Your Shoes Parade at Miss America. Even the judges get to ride in a float! Contestants design a costume and pair of shoes to show off their state pride. Nina chose to represent the New York State Flower: the Rose, while also representing the Syracuse Rose Society!

Sunday before finals, the girls were still busy serving the local community. After visiting the Heritage Health Nursing Home, all 43 contestants participated in an autograph signing event. The community really supports these ladies, and treats them like visiting royalty.

And then it was time for finals!

The ladies came out for a cute opening number, wearing shirts made by Rebecca Podio (2012 Wyoming Sweetheart and 2013 Miss Wyoming).

The Top 15 was then announced:

As they went backstage to prepare for Lifestyle and Fitness, a Non-Finalist Talent Winner was announced: South Dakota, Julia Olson. She was given the opportunity to perform her talent. 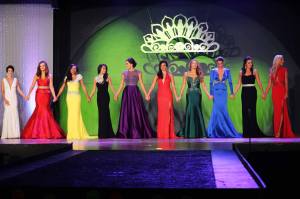 The Top Ten ladies competed in both talent, and after an intermission returned for evening gown. 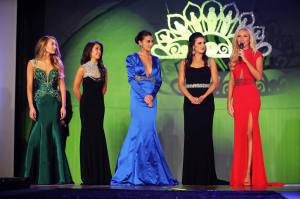 The final five contestants returned to the stage one last time for the On Stage Question portion. All queens were asked the same question: Which experiences and memories from Hoopston will you take home with you?

After an abundance of sponsor shoutouts and thank-yous, the final crowning ceremony began!

And the new Miss National Sweetheart is… 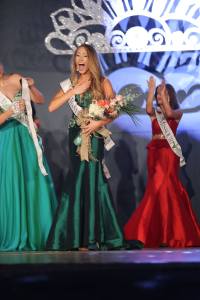